Some good words about Philip Johnson 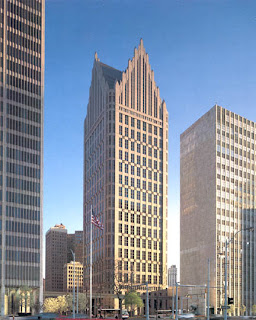 Witold Rybczynski takes the usual line against Philip Johnson by insisting that his work were the same old assemblages of old and new welded together, and once again I respond that Johnson had those qualities that are, for the most part, lacking in post-modern architecture; grace, symmetry, style, simple elemental elegance.

Indeed, postmodern architectural style in the wrong hands is a nightmare of bad taste, bad ideas and bad faith foisted on perfectly good pieces of the city scape, but Johnson wasn't one of the dullards. In his best moments he would size up the curious advantages a plot of land would give him, and would render a structure that was a curiously satisfying synthesis of other designer's notions of outrage and an sense of how to make things fit, compliment, enhance as well as challenge a city's high rise profile knew how to make his buildings fit into a skyline, particularly one that studded with structures of historical import; and have his buildings seemingly converse with the history of a given city's urban center. It is not an insult, indeed a compliment, that he had an interior designer's sense of an area's elemental gestalt; what was being added was an organizing principal that could enliven and calm a turmoil being played on the urban eye simultaneously.

His One Detroit Center in my home town does this wonderfully; the elements of the past, particularly the pitched topping and the alteration of cement and glass are an effective and underplayed homage sorts of Louis Sullivan aesthetic from Detroit's great the twenties through the forties, and yet whose lines and playfully exaggerated proportions offers an idea that there is a future for this city that is not cut off from it's past.

Johnson's best work shows that he understood this need for connectedness, and why he felt that the social engineering agenda behind embedded in the modernism in which he started was inadequate. One shapes the future by understanding the best the past has given us, and establishes within institutions a continuity of the best virtues in a manner to motivate the best good one can do for their community. This is a totalitarian impulse at the farthest edge, insisting that citizens live and work a certain way within spaces designed with it in mind to engineer away human shortcomings; the need for order of things made from materials and blue prints contains the conceit that populations can likewise be organized and kept in place. Johnson, though, appreciated the inconsistency of the human element , strong, individualistic despite an innate need to gather in communities and to create shared culture. Rather than regard his buildings as a means to mold human personality, to act as a corrective, he admitted, in the best post-modern spirit, the need for fun, play, surprise with new buildings. Structures needed to amaze, amuse, engage with an elegance that made city life a tolerable concern, even an inspiring locale. His aim wasn't allowing form following function, the cityscape needed to be fun. If function only produced anonymous reminders of corporate power, doing anything at all was , in essence, pointless. Johnson was not a soul killer. Theory of form was reduced to the practical aspects that combined function with an aesthetic grace which
welcomed workers, residents, and visitors to walk within and around, channeling a large spirit of metropolitan life.


It's a lot of bluster, yes, but it's a principle Johnson believed in all the same, and however suspicious his motives might seem in retrospect in view of his youthful dalliance with Nazism, what came from his life's work are wonderful buildings that have more often than not graced downtown areas everywhere one might look. Johnson's instinct was about order and grace and returning style and form as a means in which functionality in urban structuring would achieve beauty and maximum service at once. This is the idea that art can inspire men and women and change them and their society to a higher calling--this is the dread promise and ghost of modernism--and as seductive as the idea remains, it is a slippery result to fascism, the government that comes to worship and deify the individual of genius who is able to inspire legions into an Aryan future. Johnson fell under this seduction, and didn't speak of it much as he began to pick up commissions in American and Europe, but you wonder if he ever had faith in American democracy and its promise of limitless pluralist vistas. I doubt it, but I am grateful that he left the company of evil men and contended himself with what he could humanly do in this world that was a social good, which was to design and build.
at February 16, 2007