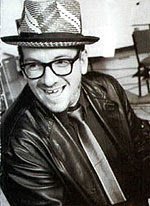 Here's hoping that Costello doesn't publish a book of poems, since his more elaborate work of the last ten years, save the punchy and rocking' When I Was Cruel ,suffer a kind of Aesthetic Bloat. He wants to be taken seriously, and has weakened what used to be a strong cache of talent by too many half-considered
at complexity, diversity,and sheer musical muscle. Contributing to the diluting of the songwriter's work is his odd multilabel record deal with Polygram Records, with whom Costello seeks to release an album on each of that company's many imprints as it they might suit particular projects. What's informative, at least, is that there's a limit to what used to seem like Costello's unlimited capability; it's a symptom shared by novelist Joyce Carole Oates or poet John Ashbery, where quantity indeed diminishes quality. The voice becomes so ubiquitous and inevitably repetitious that you're left with nothing to look forward to.Sorry to say, that one grows tired of the signature styles with unceasing stream of releases and experiments. You become thirsty for other waters.

Costello's genius lies in square in the pop music tradition, where his fanciful notions of theme and eclecticism were reined in by a sense that a song had to work on many levels and still justify itself as something essentially pop-ish, of interest to listeners. This would the central lesson he could take from the Beatles, who remained tuneful and catchy, for the most part, during their great period of experimentation and lyric irony. So much of Costello's music lately has been reminded me of nothing so much as the sound of a man in the corner, on a cot, moaning and crying over a sadness he can't express. Costello used to be able to get the words
and music to match the heart ache and anger; this is not the case any longer.

Another case in point, Joni Mitchell.

One can go on about the preening seriousness of Costello's quest to wear a bigger
beret; Painted From Memory, his collaboration with Burt Bacharach, works only half as well as it should, since nearly song is medium tempo torch song where heartbreak after heartbreak is detailed to such brutal detail that one stops caring and wishes that Costello and Bacharach provided some the slick, horn accented pop music that was Burt's other strong suit during his strongest period, back in the day. North, truth be told, was so marginal that one had to wondered what brings a man as gifted as Costello to release a disc of leftovers, half thoughts, modest inventions.

I had the faint hope that Elvis Costello's most recent CD, "The Delivery Man”, would be a solid and tuneful set of punchy rock and roll and sharply writ lyrics as was Costello's previous "When I Was Cruel" from four years ago, but such is hardly the case. Well, no, that understates the disappointment, which was something akin to questioning my tastes when I was in college and feeling compelled, fleetingly so, to apologize for all the positive reviews I'd given his albums in the Seventies and early eighties when I felt I still had some purchase on informing the culture and the people in it about the best work the best of us were doing. Fortunately I stopped drinking some years ago and avoided anything so rash; I went to sleep and the worst despair was gone, but I was still irked, cheesed off, madder than a wet hen. Elvis Costello has been sucking for years now, and I was tired of waiting for one of those "return to forms" one anticipates aging rockers to do, hoping they live long enough to make one more disc that has half the kick such musicians might have had back in the day, or the night, or just back when they cared. One way or the other it amounts to waiting for someone to die, yourself or the artist in question. It's a very slow game of chicken.

The songs are wander bits of amorphous mood setting, vaguely sad, melancholic, and inward drawn. The worst of "Painted from Memory", is irresolutely medium tempo collection of Muzaked dirges with Burt Bacharach (both of whom apparently forgetting that Bacharach’s work is marked as much by quirky, up-tempo tunes) meets the pulse less shoe-gazing sniffling of "North”. Costello has been trying to show everyone how much he's matured and grown as an artist and writer, but unlike someone like Paul Simon, who improved dramatically in his solo work after he finally bid adieu to the collegiate poesy of Simon and Garfunkel's too-precious word mongering, Costello tries to get it all in, to say it all in one song, and then again in the song after that. His songs tear at the seams, and there is not the overflow of talent you'd like, but rather an uncontainable spillage. Simon, through "Rhymin' Simon" and onward, knows the meaning of restraint, containment, care in image and metaphor. He remains a songwriter with an especially strong sense of pop structure, a matter that forces him to make each song the best he can do at the moment. Costello is, on occasion, a better melodist than Simon and a more interesting, verbally dexterous lyricist, but it is his lack of care that sinks him here and through out most of his output in the 90's. Tom Waits, his closet in terms of sheer talent, does the sloppy and the unrestrained with the kind of genius we reserve for Miles Davis and Picasso. Costello is shy of genius, is a brilliant craftsman when he applies the technique, and reapplying himself is exactly what is called for. The songs on the new one are unfocused and drift in structure--Costello seems to be trying to convince that playing being indecisive about how he wants a melody to unfold, or what mood and psychology he wants to get across is enough to evoke Hamlet like assumptions of deep thought and artful equivocation on key narrative points. He sounds like he's trying to be artfully oblique, but what Costello forgets is that his greatest talent was his ability to absorb the styles of fifty or so years of rock, pop and rhythm and blues styles and then compose a fantastically buoyant music that was at once subtly argued in the lyrics and intensely rocking with the music. Costello must not like to dance anymore, and has entered middle age with some overblown assumptions that he needs to be artier, moodier, more depressed, more diffuse, and more obtuse than he was when he was a young punk trying to make a buck off his bad attitude.

There are those die hard fans who would counter that Costello's lyrics are the subtlest and most literary of his career, something I would argue against, but all the same this is a weak defense of the general torpor that saturates "The Delivery Man". Even if it were so, albums that are more interesting to read than to listen to are fit, on principle, to be used for target practice at the next skeet shoot.

Elvis Costello is a boomer himself. He was born in 1954, I was born in 1952. The issue isn't his taste in music-- I've been a fan and supporter of Costello since he first appeared in the States in 1977, precisely because it seemed he and I shared much of the same attitude about the world and that we drew from the same musical and literary influences. The issue is the lack of consistent quality in too much of his later work. He's written a good number of good songs scattered through out the uneven and unfocused discs he's released, but it's disconcerting to buy albums on the fading hope that I might be lucky enough to get two or three good tunes out of the average seventy minutes running time per CD.

I bought the record all by myself, listened to it alone, listened to it again alone, generally listened to it for a week by myself, more or less, and found that I liked it better than any record he'd been out in several years. I wrote my review on a now defunct music site I had without the benefit of reading anyone else's reviews; what I found when I did read the notices in The Village Voice and Rolling Stone was that the reviewers thought as I did, that EC was working at full boil once again. Not surprisingly (to me) most Costello fans I talked to about Cruel liked it quite a bit; some even thought it was his best album ever. Anyway, the point is that it's more likely that our man actually put out a great album rather than manifestation of group think. Cruel, actually, bucked the trend, since most of his later work was getting mixed reviews at best. The herd mentality, if there was one regarding EC, was to give him less than unqualified raves. As for the song lyrics, you already named two of them, both "Episode of Blonds" and "45" are punchy, clipped, caustic and wonderfully layered in their nuance, puns and insinuations, and I wish he could write this well more often these days. I would add another favorite, "Spooky Girlfriend".


Waits has a shtick, sure, but everyone does. Packaging and image is a large part of getting the music out there. Finally, though, there is the music
that stands to be judged, and Waits sublime fusing of alien styles --hard bop, delta blues, Brecht-Weil, Beat prosody, and any number of influences one might toss at him--is unique and grandly textured. It is artful, as opposed to arty, and it is unique, and contrary to the notion that he makes the same album over and over again, it's more accurate to assert that he has a style, a set of aesthetic principles he brings into play and expands or contracts as his instinct dictates. The music he's making in the late nineties isn't the same as the relatively modest efforts from the Seventies. He's grown, he's gotten wiser, and he’s become more interesting to listen to. And he's the best "poetic" lyricist currently in the game.
at February 03, 2007