POETRY ON TV IN THE NEW CENTURY 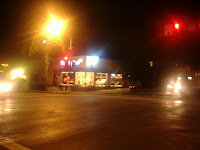 This must be it, I thought. On the screen was another panel discussion by some dais of experts summarizing what they hadn't found out after years of drawing substantial salaries. The flies skirted around the rim, stopping occasionally to inspect a shred of orange pulp that had been congealing for an hour since I last touched the glass, and then skirting around again.

One fly took flight abruptly, performing miracle circles and dives through the depressed haze of cigarette smoke, while the other remained on the room, seemingly entranced by the pulp. I looked at the screen again and listened to a man at the podium who looked to be in his fifties drone on in a voice that was as lifeless and dry as chapped lips pressed against sand paper. Balding, his fringe flowing over his ears and the collar of black shirt, his face oval shaped, his suit an orchestration of wrinkles and color blindness, I had him pegged: a soft boiled egg after a thrift—store binge. I scratched my nuts and then my scalp, thinking that I ought to take shower, as the smoke was no longer covering the body odor but now mingled with it after the while, creating an ambiance that was double the funk.

One fly remained on the glass rim inspecting the texture of the orange pulp while the other one was gone all together. I lit another cigarette and listened to the TV.

"Well, " said the speaker., who was sweating huge globules from his lips, "I was going to address to the problem that Rock Criticism is no~ facing in light of recent advances in digital technology and the emergence of non-white cultures in a main-stream genre which, ironically, was the creation of a vital American subculture. These, among other developments in international popular culture, poses some interesting problems for a generation of mostly white and middle-aged and male rock critics ~who, unless they get with the program, stand to become the next generation of reactionary commentators who, strangely, will relinquish their claim of progressivism and in turn become protectors of aesthetic standards that, in the long view, never in fact existed. BUT--"

The speaker looked up at the audience, stared straight in the C-Span camera, and gave a grin that was roaming all over his doughy, chinless face. He picked up the pages of his prepared talk and flung them in the air. One hand grabbed the podium while the other wrapped; around the microphone as though it were a gun. The pages fluttered downward around him.

"-—BUT--" he continued, his voice louder and animated now, nearly slurred as his syllabic went free—lance, "BUT.. . I've been in the hotel bar since I 'ye checked in this morning to consider the talk, and damn that bartender Jorge has a heavy hand on the pour, and I gotta tell ya I managed to stack a perfect pyramid of shot glasses, and I considered this thing here called rock criticism, and I'm pretty god damned fucked-~ right now, and so I have preface all coming comments by saying that this a pretty fucking lame way to make a living, the other people who're gonna talk are buncha Lit. Crit. drop outs who get their insights from a dime bag and a bong rather than a knowledge of The Unities, and frankly I think it sucks that I'm an assistant professor at Buffalo, NY junior college where the average humanities student LeRoi Nieman is too abstract and that a 7 and 7 is a mans' drink. Whatta bunch of limp dicks! You guys are a bunch of fuckheads because you're paying an asshole like me to tell you something. Have a drink, you fools. Hah! But on with the topic. Let's see, let's talk about blow torch wielding nuns storming the Abbey for a slice of that Communion waifer..."

At this point, the camera cut to the other panel members, who were sitting along a long, battered folding table that was draped with a white, coffee stained table cloth, three white males in grey business suits, carefully cut long hair, and wire framed glasses. While two of them remained shocked and ducked under the table, the third arose and walked of f the stage. The camera remained on the man at the podium, who was waving his arms as though signaling planes to land. He had stepped away from the podium, and was screaming at the audience.


I grabbed the remote control and after flying through the channels, came across one of those half-hour advertisements for a questionable product that's pathetically disguised as a talk show. I turned the sound of f and pulled my harmonica from my back pocket, but became frustrated when the middle notes of my brilliant improvisation came out sounded flat and atonal, a spike in the ear. I buried the harmonica under the middle cushion of the couch, and decided to get out of the house. I pushed the cocktail table out of my way, upsetting the orange juice glass. The fly was gone, though. He didn't want to hear about television, taxes or poets under suspension bridges either. I was standing in the middle of the room.

Then I sat on the couch again, picked up the remote control and turned the sound back on and watched this guy and that guy and that woman (who I imagined seducing) all take turns at the microphone talking their share of nonsense for hours and hours and hours.
at January 03, 2007