James Brown Gets Off on the Good Foot 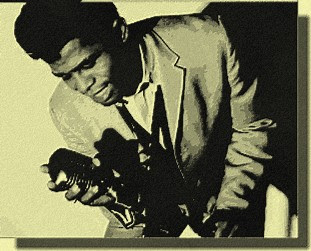 James Brown has died and with that a very large part of my music listening history has gone. Much will be said by critics and others desiring to bolster their hip credentials , but the only thing I'll add is a mention of the first time I experienced Brown. In all his funkiness. Little did anyone sitting in the room realize that we were witnessing the birth of contemporary rhythm and blues, black music without a compromise to a white audience.Much as I loved Motown, relishing the thought that was a hometown product, company owner and overseer Barry Gordy made sure that the songs were strong on melody, with substantial orchestration and traditional themes of teen love; there was nothing angry or offputting in Motown's early phases, and all his artists were scrubbed, brushed, preened, cleaned and coiffed for the Caucasian middle class, where the Big Money was.Not for James Brown, and the funkier, leaner, sweatier his music, the better. Live, as it were, in your face, or whatever part of your body he wanted to insinuate his funky rhythms in. (Brown was the Funk Borg; resistance was futile, and additionally very white).

It was in 1965 or so, and the family was in the den, watching The Ed Sullivan Show,  expecting yet another Sunday night of Topo GIGO (the Little Italian Mouse), Robert Merrill baritoning something from an Italian opera, a man balancing fifty or so plates spinning on the top of high, wobbling rods, and maybe something for the teens, a pop band from England , or maybe the Four Seasons. We were in store for something else, a tsunami of smashed expectation, a hurricane of what the fuck?. James Brown and his Famous Flames came on and did fifteen minutes (if I recall correctly) of pivotal paradigm shifting, a black man in tight shark skin suit, a high pompadour on his head glistening like polished tar, hoarsely belting lyrics that neither my brothers and sister nor our parents could make out. Brown wasn't just standing there but was rather kinetic, frenzied as angry bees from a disturbed hive, doing splits, dropping to his knees, doing running slides from the back of the stage to the front , where he'd catch the microphone stand and continue his coarse pleading, the band pumping up an endless, minimally
applied rhythm, full of hard punching horn riffs, chicken-scratch guitar fills, brilliantly insistent bass lines, drumming that was tight on the accents like shrink wrap around a steaming hot steak. It was aggressive, hard, flailing, wonderfully anarchic and yet disciplined by any number of music traditions I wasn't yet aware of when I was fifteen. What was important that it was physical, real, and that voice of his, giving rise to images of the deepest ravines of pain , rage and the scarcely habitable terrain of lust, concentrated my still-current notion of what good soul and rock vocalizing has to amount to:DAMN THE AESTHETICS, GIVE IT THE GAS.

Mom and Dad were stunned , bemused, disgusted (or maybe just one of those three adjectives) and my brothers and sister were all gabbing and laughing and getting into arguments about whether it was time to go bed. A headwind had just blown through the den, which was hard, considering that it was in the basement of our Michigan house, compact and snugly packed in all that hard concrete and cold dirt.But I was essentially self involved through no fault of my own; I was hard of hearing and had a lot of time to ponder and nuance my teenage awkwardness, and I tended to respond to things other than reading that were loud, frenzied, given to spectacle. Thus my love for rock and roll. Brown , that night, had blown all other things aside; I hadn't the vaguest idea of what it was I'd just seen , but I knew it was important, and had something of a premonition that it would be James Brown and not Topo Gigot nor the man spinning fifty or so splits on the top of long, wobbling rods who I'd continue to talk about in years to come. It turned out that I was right, not bad for a fifteen year old kid, but I had no idea that James Brown would remain worth talking about for so many decades.