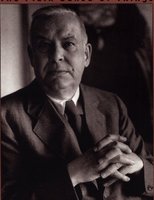 She asks, during an online discussion about poet Wallace Stevens exchange "Isn't a lyric poem supposed to be about emotion? Last time I looked, irony was not an emotion. "

Yes, a lyric poem is the verbal equivalent of a musical evocation of intense feeling that defies the logic of words to express adequately. Thus, the looping chains of association , the constant comparisons of unlike things, including the sounds of the words creating euphony. Intense emotion colors the entire world, cast it in all engrossing tint. The world to the perceiver makes a certain kind of sense, though the sense eludes them more often than not; there is even an element of paranoia that can come to play here, as in the notion that everything in the world, be it people, places, things, institutions, weather, are all somehow connected to the internal transformation.

Irony alone isn't an emotion, but because it has something to do with an individual's perception, whether the poem's speaker or the reader themselves,
it can become a key and determining factor in how hot emotion might boil or cool off, whatever the case may be. Irony concerns the incongruity between what is said and what actually is the case, and since a lyric poem operates on the transcendent level where emotion bypasses logical argument in pursuit of impossible language capturing the inexpressible, conflicts, disjunctions, distortions and contradictions between myth and fact, action and deed are likely to happen as default conditions, and will ratchet up the energy a lyric swoon requires.

I see it the other way around, since it seems to me that Stevens believes in the adage that there ought to be "no ideas but in things..."(concisely phrased by William Carlos Williams). Stevens, with compatriots Williams, Eliot, et al, were, in their varied ways, obsessed with making language a hard, malleable material no less than clay or steel, and they wanted to write and elaborate upon images that didn't obscure the fantastic qualities of the world their language was supposed to be writing about. Perception is a dominant concern for this generation of modernist poets, and Stevens, I believe, followed the loose dictates brilliantly and developed a methodology of processing the world that could capture in it many of it's amazing juxtapositions. What is amazing about Stevens' work is that he develops a philosophy of perceptual imagination from the world as it already is. As for supreme fiction, well, it's Stevens' term, and it is an imaginative and accurate short hand for his compositional practice.

"What our eyes behold may well be the text of life but one's meditations on the text and the disclosures of these meditations are no less a part of the structure of reality. " -- Wallace Stevens
Logic by itself is over rated certainly, but unalloyed intuition is equally the subject of excess estimation, and is, in fact, a recipe for perceptual disaster.
Stevens realized this and made a body of work that provoked( successfully I think) thought and discussion about the interaction of imaginative and materialist approaches to appreciating and divining the corners and contours of the earth.
"All the great things have been denied and we live in an intricacy of new and local mythologies, political, economic, poetic, which are asserted with an ever-enlarging incoherence. " --Wallace Stevens

Intuition and imagination are the things that give the world outside our bodies the shape and scope, and logic is that no-less human tendency to discover the order of raw sensory data and thus engineer ourselves usefully within it. Each capacity, with all their attendant subdivisions and distinctions, cannot be divorced from the other, the mind cannot exist sanely sans the capacity to know when the imagination ends and uncompromisable reality begins. This is the basis of Steven's work, his central idea: all the great poems of Heaven and Hell have already been written, and what remained to be examined ,in the kind of intensified investigation that poetic language allows us, are poems of the Earth, not the least in this subject matter being the ceaseless contradictions and conflicts of humanity's desire to name the world he lives in and control it.

The world, the Earth, Nature itself, of course, can be imagined in any number of ways, and humanity itself may well come to believe his abstract definitions as implacable facts, but Nature goes on in its own set of processes that man is finally subject to. However reshaped into man's image (or the image of the God man believes himself to resemble), nature pushes on, grows, expands, decays, renews, recycles, re-molds , destroys and creates anew, constantly churning, upsetting and moving through the convulsions and rough beauty that are the evidence of its life cycle.

All this renders the hoary substance of humanity's definition into so many fictions, supreme and less so, a poetry that nears special knowledge but which lacks the final gaze beyond the last, final veil. Our language is our method for beautiful guess work. Stevens gave a poetry that centered around this, to which his last message might well be that we have Poetics that cast itself in perpetual awe.
What we draw from a poem like "Sunday Morning" is his penchant for addressing everyday occurrences in terms that approach the mythological. We can suss and hacked through the ornate textures of the writing and found the "common place" events and emotions that Stevens loved to broaden in scope with his righteously writ rhetoric. This, I think, is precisely the sort of reading he would hope a reader would embark on.

You've also given us a vivid time line with your deciphering of Stevens' lush tones, and have opened the door on his grand theme, that our world as we build it, live in it and contemplate its larger moral and aesthetic worth, is connected with a habit of mind, a quirk of human personality , that has never left us. As with other modernists of his period--Eliot, and Pound, certainly-- Stevens viewed the material world as evidence of myth-creation, objects, art and philosophies that are extraordinary less for what they reveal about fixed and permanent virtues, but more the poetic ingenuity in the language created to make their case. Here, with a simple Sunday coffee by the sea and an incidental twinge of guilt, we are linked to legends and sins of cultures worshiping allegedly alien gods.

Our reality , composed as it is with particularized aesthetic rigor and moral complexity, is no less a supreme fiction. Behind the fictions and the dimensions of the respective paradigms they allows us to live within, lies the differentiated mass of humanity, constantly creating the grand poetry that is the essence and unseen breath of their lives.I don't know why there's all this defensiveness about whether Stevens is "obscure" or not. Erudition is generally a description of someone who is versed in many subjects that are outside thhe scope of the everyday; such knowledge is by nature obscure.This needn't be a veiled insult, though, because in the hands of a supreme poet, it's not a bad quality at all. The real issue comes down to readability , I think.It's the crucial distinction here between what Stevens gives the world with his splendid blend of intellectual rigor and musicality, and what this week's poet tries to slip under the door.

Steven's verses are with abstract ideas, subjects by their nature obscure and requiring rarefied terms and jargon to describe dimensions that don't readily lend themselves to streaming, concise captions. But where something as Brock-Broido's work is made dense and unclear by a strained cadence and self-consciously uglification, Stevens' ideas are smoothly parlayed to a larger world by way of addressing his emerging ideas of phenomenal existence through the lens of the world whose intransigent knowability he interrogates. His is a world that retains its mystery and wonder and which is still capable of creating actual, unsentimental awe in the curious and alert mind. "Notes toward a Supreme Fiction", "The Blue Guitar", "Emperor of Ice Cream" have that rare musical curve and sweep that set up paradoxes and then resolves them in ways that make their perception as much a part of natural process as anything else a species creature like man might abide by.
at November 22, 2006