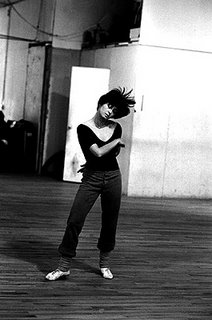 Choreographer Twyla Tharp's dance interpretation of Bob Dylan's songs, creakily titled "The Times They Are A Changin'" , brings to mind Richard Goldstein's remark in his old collection "The Poetry of Rock" that interpreting Dylan's lyrics is "...like running a USO in Hanoi",because the chance of getting "hit by flack" was unavoidable.Everyone has Their Own Private Dylan, and unless one's interpretation of the songwriter's lyrics achieve genius nearly equal to the subject under review--I'm thinking of Greil Marcus's critical book Invisible Republic-- each spin and burnishing of Dylan's writing will be found wanting. I had a chance to see Tharp's "Times..." show in San Diego and couldn't escape the desperation to make such an adaptable body of work lend itself to theatrical presentation; as mentioned, the the songs are fine as rock and roll numbers and work within criteria independent of other forms, but they are rather redundant, repetitive, musically constrained to furnish material for the work a choreographer is supposed to do. Billy Joel and the Beach Boys are obvious choices for dance interpretations simply because the songs have more bounce, variety, invention than the relatively primitive strumming Dylan preferred; a successful dance sequence derived from "Good Vibrations" isn't far afield. "Times...", though, seemed without ease or grace, and the dancers might as well have had tire chains around their ankles. The storyline, such as it was, was Kerouac kitsch filtered through some cracked lens of euphoric recall. The movies in my head when I was seventeen listening to "Blonde on Blonde" on headphones was more potent than the busy mess Tharp gave San Diego audiences, and her mistake was trying to make sense of what I think might have been her similarly subjective and private response to Dylan's work. What
she's mounted and now brought to New York is a buzzkill. It's like trying to explain why a Coen Brothers movie is funny. It cannot be done.
at November 15, 2006