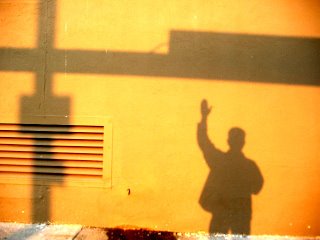 Space Needle by Kristin Fogdall is one of the finer poems that Robert Pinsky has presented for Slate readers, and it wouldn't be fair to him to not say that his choices have been more interesting of late, better conceived, less pretentious. Not everyone would agree, but I thought last week's poem Fourteen Final Lines by J.Allyn Rosser was a subtly drawn parody of "well made poems" and their last lines of neon-lit irony, the last words that encapsulate the insolubility of knotted circumstances with phrases that operate more as puns than as summations or
truth delivered.

Rosser, like myself and no doubt a generation of other readers have tired of these facile , clever, gutless conclusions, considering them as escape pods rather than fit conclusions, and have considered doing much as Rosser had done; string a series of 14 snappy last lines (or at least sentences that resemble parting remarks)together with nary an addition of connecting tissue
and then let it set there , impenetrable, a sonnet that makes an archaic and problematic form made even stranger by its refusal to let you in, to offer up a clue.

It's an inside joke, yes, and a poem about poetry, a habitual gripe of mine, but it's a joke I get and appreciate for the way it stands as both parody and protest against the ceaseless stream of shallow, gimmick prone verses that try to justify their vacuity with an entirely mechanical cleverness. Meaning is a useless thing to sift through this poems nooks and folds for; the meaning is locked in the sound of this thing, the rhetoric of adroit phrase making that attempts only to sound crystal clear. I consider "Fourteen Final Lines" to be like a gratuitous musical flourish, a sustained cadenza when none was required, a virtuoso bit of business. A fine send up.Kristin Fogdall's Space Needle is one of those rare instances where an author gives vent to a personal bit of vanity and succeeds in writing in a vivid, image rich language that retains clarity and succeeds as well in breaking beyond the suffocating solipsism of their own perspective and
taking into account an audience that would find empathy with his wondering.

If each foot took us back a year,
the dark below would be
immaculate, like a hole

in space, instead of stars,
or a jar of colored glass
someone shook

and scattered in a dream.
But from this height,
our childhood town

spreads out, a silver galaxy,
and tourists peer
into the giant metal scopes.


It's a neat trick of setting up perspectives, wondering how far one would need to step back in both time and space to see the odd connections of community and private behaviors that are the currency that binds us together. At first the vantage point is theoretical , abstract, a magic precipice one can still deny and and swiftly return to the drudgery of paying bills and wondering what secrets to reveal to one's wife,
husband, partner, but the wondering, the sheer heights make the narrator, and he or she gives themselves over something approaching rapture and imagines visions of roads looping over hills and through towns, every familiar detail of a life laid out in doll house fashion,

I scan the towers, walls
of windows, one small pane:
sofa, tiny people

face to face—a man
and woman talking,
as they may do every day,

or perhaps this is
the last time, or their first.
The lamp she crosses to

dims the room a darker gold.
It's like watching movies
on the wall at home

where we cavort across
some stretch of sand:
I want to step inside the frame

and take my own hands,
and look into my eyes,
and see what's true


It's an eternal gag, a joke of celestial origin, the human need for meaning, coherence, to be part of a narrative where events unfold and are connected and where each occurrence is part of a
meaning that is still coming into being. Fogdall connects this fantasy perspective of one's own life and the convoluted relationships and their implicit agendas with Hegel's version of the dialectic, that the secret purpose of one's life and actions is forever in flux, evolving, never static. All this can become rather ponderous, and better known poets like Wallace Stevens and John Ashbery have tilled this soil to produce some of the most brilliant verse in English written in the 20th
Century. The soil, though ,is hardly arid, and what makes Space Needle as well as it does--I think Fogdall's accomplishment here is phenomenal-- is the poem's poise, balance and symmetry. Fogdall is a writer of grace, and is well capable of navigating abstruse ideas and odd perspectives with a style quite at ease with the difficult task of rendering an alluring self-critique of one's blinkered-concept of reality with a sense of place. Fogdall is sure and precise in her images of things that she has seen and remembers vividly, if imperfectly:

The wind is off the Sound,
and makes no sound

except a ruffle
at the rail edge.
On the tiny street below,

a man is working on the road.
Alone behind his truck,
lit by a magnesium haze, he turns

a little orange wheel,
some apparatus out of sight.
He is the perfect

model of a man, which means
we love his task in ways
that he cannot, and wish

to close the shutter on
the stars, our years, with something
like his gesture of repair.

This might have been written by Carson McCullers in Ballad of a Sad Cafe, or
John Cheever at the start of The Wapshot Chronicle; the beauty of the writing is that we recognize what Fogdall's poem shares with the writing of the other two writers, which is melancholy. For all the power and ferocity of dreams, aspirations and desires to make one's
place in history, there is the ceaseless dread of loneliness that colors each word we speak and every gesture we make. The never that Fogdall touches is that for all the language we use to define and justify ourselves, we are finally inexplicable alone, separate, with only memories to console our standing.
at October 04, 2006