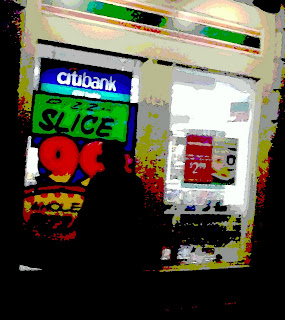 I find myself again leafing through the brown  pages of college texts, most having to do with the string of Gordian knots called Contemporary Literary Criticism, the variety that infiltrated American English Departments in the Sixties and drove out the last vestiges of Romanticism and killed whatever taste their was for New Criticism. These are things I've pondered on the run since getting my degree in 1981, riffing on matters reducible to Lyotard's book The Post Modern Condition.
Do postmodern writers avoid grand narratives? Hardly, as the point of post modern writing was to confront the formerly dominant notion of master narrative and investigate the inconsistencies in the conceits, and to devise alternative ways of telling big stories and conveying big ideas. The doings of Pynchon, DeLillo and Barth seem not to want to destroy the grand narratives as such, but instead to re-tool it, re-build, tweak and switch-and-swap styles, one for the other, in the practice of pastiche and parody, in order to extend the potential of fiction with interesting accounts of either Historical processes, or the banality of daily life. The points posted about Pynchon being particularly strong with knowledge of history are well taken, since his fictional project is to imagine and elaborate on the gaps and alienated niches left out of an allegedly all- encompassing narrative sweep, the events and personalities otherwise that reside at the margins of, the periphery of the storyline. A task of postmodern fiction, among other ploys, is to bring the trivialized and the ignored to the center of the action, and weave them into the structure as elements no less essential to what ever conclusion a novelist might come to than are the efforts of Presidents, Kings, or Philosophers directing hypothetical History to some final, defining resolution.


The narrative is not made less grand, but bigger, denser, more intriguing to suss out. It's not that either Pynchon or DeLillo had set out to debunk the notion of that fiction can give a reliable accounting of history or the resonance of real-life; it would seem that both remembered that what they want to do is write fiction, after all, and that neither they, nor their fellows, are required to produce work that attempts verisimilitude. Grand narratives aren't shunned by post modern writers, but are played with, expanded, adapted to new shapes and intentions; this demonstrates resilience, not exhaustion, and the undertaking is more interesting for the fiction-writing post modernist. I am of a mind that philosophers of post modernism have different sympathies than postmodern novelists. It's not as though all postmodern writers are set on debunking or re-tooling grand narratives. Quite the opposite. Other writers, arguably post-modern, settle on smaller realities, dioramas of kind, worlds self-contained within their own subset: Burroughs, Vonnegut, Donald Barthelme, Kathy Acker, Ron Sukineck, among others of more recent vintage do their work at the borders, creating a vivid narrative sense with their particular experiments that mirrors, I think, a tradition of short stories and novellas, life in obscured corners brought to light. Skewed, though, skewed and wacky, a post modernist signature.
Why then would you think of Pynchon at all as a PM while Steinbeck is considered the quintessential Modern? There seems to be no difference. Pynchon would be postmodern because there is a knowingness about his virtuoso use of myth: besides the fact that he mixes his cultural dictions, high to low and middle brow in the center, he's aware of the ultimate transparency of myth as being just another good yarn one may play with however one decides. Steinbeck, in his faith in the final truth of narrative function, sees myth as containing symbolic Truth about human nature that resists critique. Pynchon’s' use is playfully skeptical, though Steinbeck’s' best work is no less compelling for his use of archetypes.
Richard Rorty, in "Contingency, Irony, and Solidarity" defines an "ironist" as someone who realizes "that anything can be made to look good or bad by being redescribed" Are postmodern writers this kind of "ironist"? No more, it would seem, than any other writer scribing under the modernist tenet of "making it new", or to another extreme, 'defamiliarizing" (from Bahktin) recognizable settings, characters and schemes in a language that's meant to provoke readers to see their world in new ways. This is a modernist habit that the new, cubist, cut-up, stream-of-conscious takes on the world will sweep away past aesthetic interpretative models and lead one to a the correct formation of the world-- there remains a faith that language and other senses can apprehend and describe a tangible, material world and capture its complex composition, a "metaphysics of presence" that art can unearth. Irony, in this sense, is usually contained within the story, a result of several kinds of narrative operations coming to a crucial moment of ironic intensity that then drives the story into directions one , with hope, didn't anticipate.
Post modern writers start off with the intent of being post modern from the start, and rather than have their inventions gear us for a challenge to see the world in a truer light (contrasted against previous schools of lovely language but false conclusions), the project is to debunk the idea of narrative style all together. Irony is intended to demonstrate some flaws in character's assumptions about the world, a description of the world that emerges contrarily after we've been introduced to the zeitgeist of the fictionalized terrain. Post modern writers are ironists of a different sort, decidedly more acidic and cynical about whether narrative in any form can hone our instincts. A professor I saw in a lecture point out that something becomes art once it is framed, no matter what that object may be .This Marcel Duchamp’s' idea, a classic dada gesture he offered with his ready-mades, such as urinals hoisted upon gallery walls, and snow shovels on pedestals. The point, though, was that the object became an aesthetic object, denatured, in a manner of speaking, from its natural context and forced, suddenly, to be discussed in its very "thingness". The object becomes art by the lexicon we wrap around it, a linguistic default.Whether the object is art as most understand art to be--the result of an inner expressive need to mold , shape and hone materials and forms into an a medium that engages a set of ideas about the world, or unearths some fleeting sense of human experience -- isn't the point here. Ironically, art, generally defined as something that is absent all utility, any definable function, is suddenly given a use that is sufficiently economic, which is to keep an art industry in motion; it is the sound of money. Duchamp, and other Dadaists who sought to undermine this idea of art and its supposed spiritual epiphanies for the privileged few, instead furnished a whole new rational for art vending.
at February 12, 2010