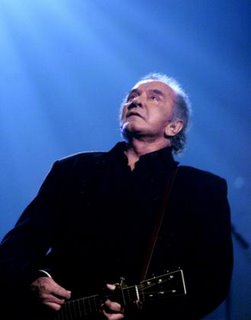 Pop music critic Jody Rosen writes in Slate that as if no one realized that Johnny Cash was really in Show Business and that it's his mission to point it out. Such is the strain of producing weekly columns where some little-discussed
"issue" or controversy with an iconic musician has to be brought to our attention and addressed with varying degrees of make believe alarm.

We've had a snippy, chatty, snarky little stretch recently by David Yaffe about Bob Dylan's interest in Alicia Keyes in particular and strong black women in general, leaving out the salient point that Dylan and the objects of his affection are, we assume, consenting adults engaged in attractions that have harmed no one, nor resulted in theft, destruction of property, or anyone being arrested. Yet Yaffe brought us a "scoop" every other news outlet overlooked or ignored, and his analysis of this decades long habit showed us ...exactly what? Only that Yaffe managed to get Dylan and Keyes mentioned in the same headline on the sheerest of reasons , and presented an outline of Dylan's career that was virtually pointless and dull. That's a hard trick, considering the subject.

Rosen on whether Cash's late recordings amount to cheese rests on the teetering premise that a musician cannot be a Celebrity and an Artist as well; citing hi jinks with The Monkees (or reciting corny poems with shlockmeister Rod McKuen) are things that come with the territory, and it ought not surprise anyone that Cash's best work , which is impressive and large , obscures the admittedly cheesier tasks done in the name of show business.

Comparing the marketing of Cash to the bloated, grandiose and drunken belligerent tough guyism
of late Sinatra misses everything you can name, whether it's the bus, the boat,or the point, if there was one to begin with.The examples presented are anything but cheesy; what's remarkable is the restraint in framing a taciturn icon's accumulating reputation as Great American Musician.

All work simply and effectively with qualities, virtues and image Cash has always had all these decades, variations on The Man In Black and the ongoing themes of sin, redemption, honor and the lack of it.Decorated and posed and framed and lit just so, yes, but the effect is classy by it's lack of baroque excess. Sinatra's presentation of self in his declining years, let us say, was a continual "fuck you" of self assertion (to use Robert Christgau's line) through which he took pride in his fuck ups, his infidelities, his crudeness, his dalliance with Mafia goons and brushed them off with the maudlin bathos of "My Way". Sinatra's reputation of being one of America's greatest pop singers, ever, takes on a foul stench that won't abate, like a dumpster in the back of a food market.
at August 16, 2006