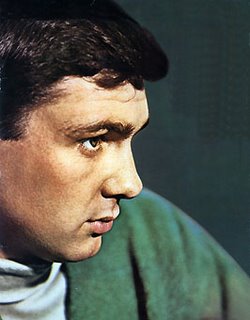 I was saddened to hear about the passing of singer Gene Pitney, dead of "natural causes" the day after he'd given a concert in Cardiff. Fittingly, he received a standing ovation, and this comes with the old saw that he "died with his boots on." Timing is everything, I realize, and it's a kind thing that God in His wisdom allowed Pitney to finish the performance; better to leave an audience stunned with news of an unexpected death than traumatized with a witness to a singer's last tortured high notes.

Tortured high notes were precisely what Pitney's music were about, observable in the operatic, compressed, grandiose and florid teen angst songs he sang with a voice that could start out low, smooth, slightly scratchy with restraint, and then in the sudden turn in tempo and a light flourish of horns or sweeping , storm-bringing violins, slide up the banister to the next landing and again defy gravity to the yet the next level as he his voice climbed in register, piercing the heart with melodrama and perfect pitch as the most banal love stories became the raging of simultaneous tempests. It was corny on the face of it, but Pitney had the voice and he had the songs to pull it off and make records that still have that stirring hard hitting effect; "Town Without Pity", "It Hurts To Be In Love", "Twenty Four Hours to Tulsa", "I'm Gonna Be Strong", and an substantial string of other hits he had ( 16 top twenty hits between 1961 through 1968) took the tear jerker to the next level. As mentioned by someone the other day in the British press commemorating his music, his tunes weren't love songs, they were suicide notes. Pitney's multi-octave sobbing qualified as Johnny Ray turning into the Hulk wherein the sadder he was made,
the stronger his voice became. All this was enough for me to buy his records in the early Sixties when I was just making my way to developing my own tastes in musicians and their sounds.

Most of the early stuff I liked--The Four Seasons, Peter Paul and Mary--I dismiss as charming indulgences of a young boy who hadn't yet become a snob, but Pitney? I kept a soft spot for his recordings in my heart, and defended him in recent years when those verbal battles about musical tastes found his name impugned in my presence. The Prince of Perfect Pitch deserves respect for turning the roiling moodiness of teenage love into
sublime expressions of virtuoso emotionalism.