A poem by Sharon Olds 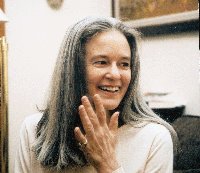 The first thing to be said about this week's poem concerns the recording of poet Sharon Olds reading her poem, "The Worker", currently posted on Slate. The sound quality, as usual, is sexless, nasal, a suffocating voice with nostrils plugged up invoking verse from behind a cellar door, but there is something more this time, a listless spirit of languor and defeat, as Olds reads the lines , the succeeding details without a hint or pretense of inflection.

The writing, to be sure, wants to get the feeling at being at a psychic remove while one watches a parent processed and disposed of in death, yet Olds makes us feeling nothing at all, there is no drama in her reading, no momentum, just a list without a lilt.That is because the poem is in essence a run on sentence, and the lack of emphasis or portent is conspicuous by its absence. Even in reading the poem several times I don't know what it was Olds was trying to get at. The problem with writing poems that lack stanzas is that unless one creates an image or a flurry of lyric combinations that underscore a narrative point, as shifts in tempo and harmonic structure would in a musical piece, one is more or less stuck with someone who is in a state of shock, verbalizing each unassimilated instance in a grueling circumstance. This claustrophobic, clustered, a sense of out of body experience in all, but given the fairly flat,almost clinical language Olds proffers, her writing would have benefited from the breathing space stanzas provide, hence making the poem more in line with a black out experience--one surreal barrage following, unconnected, from the other--that this line of boxcars racing down the mountain side:

Nothing had been burned with my mother,
even the tiny, blue snowflakes
of her cotton hospital gown the floor-nurse took
back, and kept.

The rows of tongues of
flame inside the mortuary
incinerator were given bone,
flesh, blood, wedding ring
and hair.

Suddenly I'm glad I do not
have that job mother after
mother after father after
father, a child, baby, to scrape
out of the firebox into the urethane
urn.

I always forget the worker,
the one instead of me who picked that
dewy, rigid corpse up,
and slid it in the body-sack and zipped it to;
the one who lifted it out of the bag
and put it in its tray on the conveyor belt;
the one who pushed the button to move her
into the enclosure; the one who flipped the
switch to fire the jets.

For a moment,
I almost see it, my mother's body
made of a feeding frenzy of fire,
and then the scraper scrapes her—and a few
ashes of the one before, and a grain
of the one before that, and the one before that—
into the box, and the secretary
labels it, and puts it in the ball-bearing
file drawer, by her desk, and the little
carton of my mom abides, the office
calendar page of April is torn,
May, June, July, August,
out she rolls,

I do my amateur
teamster featherbedding, the minister
does his work of magic respect,
taking the heat of the eternal
for the rest of us whose
fingertips and nails break into the
harsh, purplish, Molokai sand
and convey a handful out over the rail and
give her to the wind and sea,
roughage for the fishes' work of
seeding the deep,

we give her to the
hard-laboring moon, we give her
leave, and permanent furlough.

The white space gives you pause to refresh yourself and perhaps constructing a cadence which would give these flatline phrases rhythmic verve. Even with the suggested director's seat, Olds veers wildly between many items: flames, paperwork,
consuming jet flames. This is a three year old with an 8mm camera.The key problem is that the poem has a warmed over feeling to it,like stale toast one tries to revivify in the microwave, as if this were the work of the Professional Poet who needed to compose something to keep their hand in the game and dredged up an overworked subject they most likely have had better success with in earlier years, in earlier books. This reads less as a poem and more as a journal entry or a post on any one of the millions of lonely blogs someone puts up in a spate of enthusiasm only to abandon after a few posts.

The internet is filled with billions of ghost home pages and blog offerings, and filled as well with billions of chapbooks and thin poetry collections filled with strained and pale expressions of real sorrow or joy; there is no compelling reason to return to them exactly because they are banal. A writer as well known and potentially potent as Sharon Olds ought to be able to make us care about this cremation, or relate to the detachment with stronger, more ironic language. This is a sad note to oneself or one's therapist, unleavened by art, which is a shame, since art is that quality that makes us care about whatever the poet might be trying to come to terms with.There remains the obligation to make this compelling to the reader; there is an argument to be made, there is a conversation to be started with writing, there is something to be given the reader who leaves the page with something they hadn't when they began to read.
at March 07, 2006