Why Was Edvard Munch so Morbid? 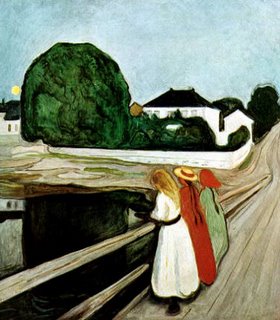 One looks at a reprint of Munch's most famous painting The Scream and then regards the subtler, more somber depressions of this painter's angst soaked paintings, such Girls On the Jetty, and wonder why he was such a glum Gus. The reason is more practical and less mysterious than some of our more mystical critics would insist.He was good at it. With all the impressionist swellings, swirling clouds, jaggedly mad crows, blurred lines and obscured faces moving about his canvases under the darkest, deepest shades and tones he could manage, what Munch saw in the world wasn't nice formations in pleasing shapes and arrangements, but rather as a thin film of appearance under which each and everyone of his dark moods and skewed perception pulsed, ached and persistently throbbed. Munch and his allies did a rather nice job of freeing the artist from having to make pretty pictures for dentist offices. Not that it was a bad mood alone that motivated his brush strokes. The desire to depict reality in a different way, to find a truth that hadn't yet been brought forward, is a permanent impulse among artists who are the least bit figurative, and Munch's penchant for gloom and depressed spaces were a perfect inspiration, it that's the word, to take the image of the world apart, tweak the essential elements, and reassemble it, askew, fuzzy, angular. Munch's genius was also his pathology, and the crazed energy in his head which drove him to relentless distraction was additionally his ugly gift to the world. It still commands our attention generations later.
at February 25, 2006