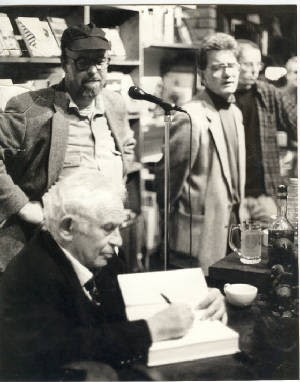 Norman Mailer titled a 1963 essay collection The Presidential Papers, with it in mind to have the miscellaneous essays, asides, interviews, book reviews and poems serve as a set of metaphysical advisories for then President John F.Kennedy. Kennedy was assasinated the same year, however, and Mailer's book is a conspicous artifact of the hopes among true believers that more than Kennedy's body didn't die that fatal day.

Here we are again, in the early evening of November 22, 2005, hazily remembering and half-heartedly feeling bad about it being the 42nd anniversary of the assassination of President John F. Kennedy. It is one of those touchstone events with which we've come to mark our progress both as individuals with ideals ,and as democracy that attempts to overcome its worse habits and to ensure and protect freedom for all Americans. As usual, we come up short--I am constantly doing and saying things that run afoul of my professed liberalism on matters of civil rights and free speech, and as a country we come up short when we match ourselves against every grand themed speech given on patriotic holidays when our mandate from Heaven is declared, affirmed, praised. Coming away from these ridiculously steep points of comparison always lacking in ways one could be more "Christ like" or "Kennedyesque" and feeling horrible, sullen and cynical as a result, I have it in mind to ignore Kennedy's image, his body of work, his good deeds and grand speeches, his movie star looks, all those things that JFK supposedly meant to have America become had he lived long enough to work his reputed magic. It has become something like the worship of the dead, a yearning to mope and whine that our best nature and potential was stolen from us and now lies entombed in the dark sealed enclosure that contains the stilled embodiment of our last best chance to do good work.

It's whining, of course, and it comes across as a collective letting-ourselves-of-the-hook when we look around for who is responsible for the wrong turn History took. It's as if we have had ourselves driven from Eden after another, constantly cast out by ogres, terrorists, assassins, malcontents and psychopaths and insane dictators who have no desire to see the population of a great country re-assume command of their lives and extend our potential to- do- good- by- being -good have the effect of getting people off their knees in the worship of betrayed idealism and instead get engaged with their communities that still require the good graces we used to speak of. I am cranky at the moment and fairly disgusted with all the mewling melodies coming from the ain't-it-a-shame club. Once again, enough of this. Let's close the casket a last time and lower JFK into the ground and get on to doing just a little of those good works we've been wishing someone would inspire us to take on. We have to be our own heroes and move into a future determined to make it work.

The past is a lonely country because everyone who lives there is dead
at November 22, 2005