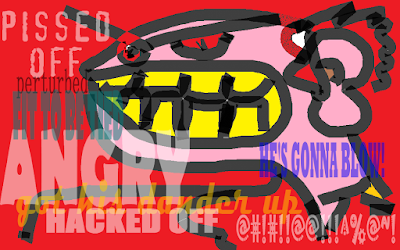 Some of  otherwise bright pop culture journalists reveal  in the frequent  over rating every entertainer who displays a  spark of independent thinking and an unwillingness to stick with the status quo. Such is the case in a recent Slate article staking a claim for anti-magician Penn Jillette as being a public intellectual, ala Chomsky,Vidal Christopher Hitchens or William F.Buckley.

It makes me imagine that some desperate cabal of  Internet editors, eager to have ready  material on which to fill up their web pages with the daily requirement of sniping, toadying, salivating gruel, decided that Jillette was a public intellectual because he had a loud mouth, was a libertarian, and an aethiest;  being a contrarian, though, does not a credentialed Big Thinker make, although it is ideal for the tell-tale Swelled Head . A bellicose sort, Jillette is the kind who considers his opinions--routinized contrariness  all--are made brilliant and more nuanced if he both shots them in hoarse bombast and laces the points with various "fucks" and "shits".

But really, when was the last time you read something from this guy that was worth quoting?I suspect that Jillette would stiff if he were to a sit down discussion with these writers. Jillette is a moderately funny provocateur who can from time to time get you to think in meta-terms about the whole issue of images and appearances and or willingness to surrender our skepticism for some sense of living in a meaningful universe. Fine and dandy, but that is as far as his discourse goes when one listens to him at length, and extending his nihilism to media corruption and seduction of its audience false paradigms presented by entrenched political concerns , all through the clever metaphor of his magic act strains after awhile, and is reflective of the usual grousings of a self-appointed

Everyman who has found a pitch that can be applied to nearly every subject that comes his way. Jillette is less a public intellectual than he is crank with a malleable script. Not that he's alone in this guise of being a "public intellectual"; Gore Vidal, more knowledgeable by far than Jillette in the Humanities, none the less manages to reassert a particular number of notions that he's been carping on for several decades. I will say that Jillette is as much a public intellectual as Orson Bean was. Or Dick Cavett.  In defense of Bean and Cavett, though, both realized that they were paid entertainers, not pundits credentialed with degrees and teaching positions, and honed their curiosity about more worldly and abstract affairs by knowing how to ask interesting, knowledgeable questions to those who were the professional experts. At best, this skill gave the curious audience better answers than they would have expected. Charlie Rose does this. And again, Jillette is not Charlie Rose. Penn Jillette is a bellicose fool in a perpetual state of irritation. He is a man in search of a stroke.