Metallica goes to the Hall of Fame 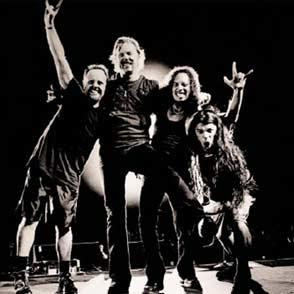 Somewhere in their headbanging journey a bevy of smart rock critics seeking a token metal band to extol as encapsulating the rebel virtues of the music picked up on these plodding purveyors of car wreck chord changes and have argued in earnest that their by-number anger and angst is of greater merit than the inchoate whining and flailing it actually is.

If they have captured the feeling of a generation, then it a mind-dead generation they represent; their music is a catalog of things most of us grow out of. They haven't a memorable riff, not a quotable line to shout in the car on the way to work, not a grunt nor a scream nor a rim shot that would agitate the nervous system to a creative frenzy. Metallica is the music of stalled traffic, tons of machinery grinding gears, moving nowhere.

We're left to ask when will the drugs wear off the Hall of Fame's nominating board and they realize their terrible slight of motor city punk pioneers the MC5 and Iggy and the Stooges? Those are two bands who created a sound it took the rest of American and British bands over a decade to catch up with. Please, some sane choices for who deserves the pantheon for this insane music.
at January 16, 2009