I had the good fortune of seeing the recently passed away jazz trumpeter Freddie Hubbard several times when he played San Diego, most memorably in the Seventies when he played at the Catamaran Hotel. At the time Hubbard had made a switch from the straight ahead style on which his considerable reputation was made to a more commercial, funk and fusion approach, heavy on back beats, simple melodies, with a minimum of improvisation, and this was the material he concentrated on for the first hour of his show. Technically impressive, I remembered thinking , and I leaned over to my date and said that I thought it was a shame he was performing the recent radio-friendly hits that had brought Hubbard's name to a broader,non-jazz audience. It was as though Hubbard had heard me, for as yet another anemic ballad finished, he turned to the rhythm section and began an uptempo count and BAM! the group snapped into a head-twisting bop. 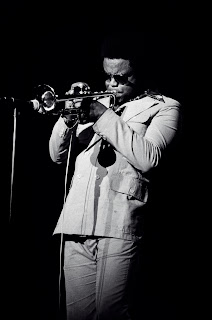 Hubbard, who was an imposing figure on stage and had a build that reminded me of a fast, hungry boxer, blew the finest trumpet solo I'd ever heard, a brilliant, fast, blinding succession of lines that skittered, danced and pirouetted in configurations that seemed alive, serpentine. For the rest of the night Hubbard was in command of his trumpet, the strong , bell like clarity of his tone and the sense of fast-witted sass and unexpected delicacy on the slower numbers continually surprising a crowd that, perhaps attracted to the gig by commercial records geared for popular acceptance, quite possibly had no idea that they were coming to see the best jazz trumpet player of his generation.

Hubbard, like many great musicians, made some dubious style choices, and was, at times, a pain in the ass, as I learned when he had a week long engagement in the eighties at the Summer House Inn's jazz club Elario's, where I worked as a reservationist. Hubbard stayed in the hotel during his gig, and was, shall we say, difficult in temperament. I answered the in house phone at the front desk one afternoon and it was Hubbard calling from his room, asking the bellman to bring up a pack of Marlboros; I decided to bring him the smokes myself, seeing a chance to actually meet a musician I admired. I knocked on the door of his room, which opened with a jolt, and saw Hubbard standing there, in his underwear and t-shirt.He tilted his head and looked at me through squinting eyes.

"Marlboros" I said, and handed the pack over to him.He took the pack and shuffled around a bit, an awkward moment. "If you need anything else, just give us a call at the Front Desk" is what I said. Hubbard said something and closed the door. The following morning I spent most of the afternoon answering phone calls from customers who'd come to see Hubbard perform at the restaurant; it seems he got into an argument with the pianist on the band stand between tunes and fired him on the spot, adding a gratuitous remark about the size of his personal business.

Let's say here that Freddie Hubbard was the greatest trumpet player of my lifetime and that what I concentrate on are those records where there seems to be no disputing the fact, Red Clay, Outposts, Body and Soul, Hub Tones. The composer of the classic "Red Clay" had clay feet it seems, but when all is said and done it is the work great artists that lives on, not the foibles and contradictions. Freddie Hubbard,thank you. Thank you very much.
at January 03, 2009