USED BOOKS: the reputation of writers 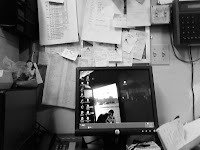 There's brilliance in Norman Mailer's readings of how mass culture turns us into somnambulant consumers, but it would have been better, saner perhaps if he'd said that whites should walk a mile in a suffering man's shows rather than reify his (and her) culture and then wax philosophical about their supposed relationship to violence. On many points one can argue was on the mark , but his supposition that a keen and honest sort of violence , person to person (as opposed to intuitional violence perpetrated by the state) enables an individual to have a more authentic life sounds a sophomore crush than it does a useful cure. Mailer, though, backed away from these statements in terms of how violence was treated in his work. The best examples are two novels, written one after the other, An American Dream and Why are We in Vietnam? Dream rather obviously was a metaphorical attempt to duplicate the delirium and raging insanity of stabbing his own wife Adele with a character who shores up his manhood with the murder of his wife, beating up a black character obviously modeled after Miles Davis, stealing a Mob boss's girl friend, and defying the New York City police department (and other federal agencies) in making the murder look like a suicide. It is an exciting and disturbing book, written in sheer deadline mania, with it in mind to present place the reader inside the mind of someone who is seduced by the lure of violence. Mailer, I think, was disturbed by the turns his imagination took, and gave us next a metaphorical study of how such monstrosity comes into being, Why are We in Vietnam? being essentially a blow-torched recasting of Faulkner's story The Bear, told in the voice of a narrator who mashes languages, tongues, and tones and varying degrees of dictions and slang to describe a bloody bear hunt in Alaska.

Vietnam, one must note, isn't mentioned until the last page, and one can discern the answer that makes for the novel's title; we were in Vietnam because, as a country with an insane faith in rugged individualism and the right to bear arms, we were compelled to be in that country as an armed, occupying. We were there because we had to be, it was in our blood. Mailer's conclusion echoes William Carlos Williams ' quote that "...the pure products of America go insane..." Mailer never repudiated The White Negro, but he did treat violence as a negative result of being It's one of those books I always see lying around somewhere, and it's one that I always pass by.. Giles Goat Boy I've never read It's one of those books I always see lying around somewhere, and it's one that I always pass by. No particular reason. But I did enjoy his The Floating Opera and The End of the Road, and I found his essays on literature to some of the most trenchant commentary offered by a contemporary American author. The Floating Opera, I’d say, was when the post-modern novel, ever self-reflective of its own narrative technique and the embedded hegemonies they contain, was written back when such stance still had the capacity to be comic, satiric, and ironic without that last quality being the default tone for an entire story’s length. This was quite a bit before the term was invented and then became codified as a style one may learn and mimic for a designated middle brow audience; Barth, Pynchon, Barthelme, DeLillo, Vonnegut, these writers had the spirit of Twain more than one would suspect; as Twain investigated the effects of the East Coast capitalist culture changing the face of American cultures in the Western States with the reach of railroad lines to spread it’s values and economic philosophy, our nascent post moderns traced the places when the grand narratives that made our sense of place and purpose began to slip, as technology shrank the world , broadened awareness of Others , and unleashed counter narratives to the end all and be all of the world.

Robert Coover is one of the most interesting writers from that generation of meta-fictionists--he is what I think of when I think of a writer taking apart a narrative strategy and making the parts fit in new and maddening ways. Spanking the Maid was deliciously skewed where Robert Coover retells, reshapes, reformulates a hackneyed seduction scenario which adheres, in all the twisting and colorations, to the classic line of erotic writing; the excitement isn't in the getting , but in the anticipation of getting, in the suspense between subjects. Robert Coover makes the suspension that space where the senses are no aid to one's idea of self-empowerment. The Universal Baseball Association is a book I consider to be as close to a Great American Novel as anything of worth that's been published in the last fifty years. That I've read anyway. Origin of the Brunists is especially potent, and I think his writing on end-of-the-world cults is as potent as DeLillo's or Pynchon's, maybe even more so.

What I find interesting is that the writing of these writers--Barth, Barthelme, Coover, Pynchon, Ronald Sukinec-- follow up on the proto meta-fiction Lawrence Sterne gave the world with the adventures of Tristam Shanty and the rather obvious and beguiling conceit that the characters are aware they are contained in book. So you're right, there's nothing new, as it were, in this kind of writing, but it does one well to see that the form can thrive with writers who can master their materials and the form and invent something that produces both pleasure and intellection.

On that score, the ability to make one laugh as they read and gain an insoluble insight in a fictional form, Gore Vidal will have his reputation rise, as you mentioned, since he is a more disciplined novelist than Mailer --Duluth is undervalued indeed-- and his essays, while sometimes recycling various testimonials , are models of how a writer ought to think at the keyboard; clearly, unaffected by conventional wisdom, willing to advance an unpopular but soundly argued alternative to received opinion in clear, elegantly phrased language.
at July 02, 2008