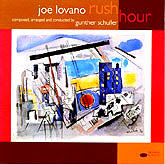 It’s early as I write this, and I'm listening to Rush Hour by Joe Lovano, composed and conducted by Gunther Schuller. This is as aesthetic a moment I've ever had, as Lovano's saxophone work operates in a variety of faint moods and dramatic sweeps; his phrasing is always choice, his cadences are full of surprise, his tone is a well trained voice of its own.A handy group of orchestrated compositions--"Prelude to a Kiss" (Ellington), "Kathline Gray" (Ornette Coleman). Lovano's tenor saxophone work is supreme against the sweeping textures of Schullers' orchestrations: ensemble and soloist work as choice extremes over the mood scapes. There's an ethereal steam brewing amid the extended blues choruses, bop cascades and serial investigations. This is the kind of pure musical work I wish Zappa had more time for. I am amazed at Lovanos' control over his technique and inspiration: he seems to draw a cool, fluctuating of bends and slurs from his horn: his ability to step inside the tradition and then step out of it again to entertain some grainier abstractions brings Wayne Shorter to mind. Not that one stops at the comparasion, only that Shorter comes closest to doing what's evident in Lovanos' inventions. Credit to Schuller: he project recovers nicely, I think, from his undiffereniated patchwork of "Epitath", a troubled labor of love.
at January 27, 2008