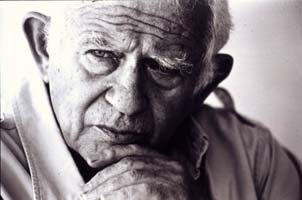 The sour truth is that I am imprisoned with a perception that will settle for nothing less than making a revolution in the consciousness of our time. Whether rightly or wrongly, it is then obvious that I would go so far as to think it is my present and future work which will have the deepest influence of any work being done by an American novelist in these years. I could be wrong, and if I am, then I’m the fool who will pay the bill, but I think we can all agree it would cheat this collection of its true interest to present myself as more modest than I am.
--Norman Mailer, Advertisements for Myself


The irony of it all, I guess, is that Mailer can be said to tread on the Noble Savage sentiment, but what he asserts in both "White Negro" and "The Faith of Graffiti" is there is a need, nay, a requirement for self-definition among those who are denied the means to do so for reasons of race, gender, economics, and that the form these taggers have taken is a way of making something that resonates. What he argues , essentially, is that the impulse, inspiration and discipline of committing yourself to unsullied artistic expression is the same , whether it happens to be in European salons, Soho Art Galleries, Museum Walls, or on the side of a Brooklin water tower; he rejects art as the domain of the white culture the final aim of which is a fat commission and corporate sponsorship and college courses and brings it again to something that is human in it's dimension. As it regards black American culture, the likes of Amiri Baraka, Cornel West and Eric Michael Dyson would find quite a bit to agree with about Mailer's treatise. Urban culture is now the stuff of dissertations , has been codified as an aesthetic with it's own critical parlance, and is now a legitimate part of the larger cultural landscape of America, and Graffiti, like it or not, is an essential element of this mid 20th century development. Mailer was the first one to write seriously , on his own terms , about this. One can argue with Mailer's tone, his arch style and his interest in neo-prmitivism, but I think his interest in the young men he interviewed and spent weeks with as a writer was honest and his ideas about their work were sincere. In a forward to the book, he reveals that the title was given to him by an artist who was seriously injured from a steep fall that happened when he was tagging a structure from on high. He was talking about having faith in something, an ideal, that motivated you beyond your limits. I can only paraphrase, but it came down to him telling Mailer that the name of the book that would come out of this would be The Faith of Grafitti". Mailer recognized something amazing.
at November 10, 2007