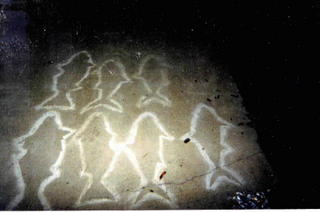 Strange as the rain they didn’t predict I was there staring across the when the phone rang.
The phone was black as arrest warrant ink, a quality that was more ominous by the sound of the bell, which was shrill like the cry of man bobbing on the line where the sky meets the lake.
Mary turned her head from the mirror where she was watching herself undo a ribbon around her neck as I stood in the middle of the room, counting the rings with the tap of ay big left toe.
“Silly” she said, walking to the phone, two strands of ribbon blowing over her shoulder in what seemed like a wind, “your games amuse me, but really, someone might be trying to get through to us.”
She stopped just short of the n1.ght table the phone rested on and picked up the receiver from the cradle with an arch of the back and a swoop of the arm that seemed professional, very profess
The phone seemed to leap into her hand through attractions unspoken of in the city. though by some natural attraction, L paper clips soaring to the north and south poles of a horse—shoe magnet.
Mary said a few words, nodding, cradling the phone between her Mar and shoulder as she finished untying the knot around her neck.
The ribbon floated to the floor as Mary took the phone from her ear and pointed it my direction,
“It’s for you” she said, “it’s Andy
The walk across the room took along time.
“Hi Ted, this is Andy. I wanted to see if you’d gotten those poems I dropped off?”
His breathing was a gurgling, grating rustle of congestion and worse. The black holes of the receiver appeared to vibrate, pulse in time to his rasping. The receiver felt clammy felt clammy, and the wallpaper, which I hadn’t noticed before, was suddenly bright and screaming with reds, yellows, pinks, and punishes blacks. This was all wrong. My scalp felt as though my hairline had been stapled into position as a guard against a long and blustering wind from the desert.

And the phone went dead. And then the sun exploded.
In heaven I was seated on a café on a cloud over looking planet debris. Monkeys were at every table, tossing silver ware and plates across an endless expanse.
at September 16, 2005