AUGUST , MIDDLE OF THE NIGHT

Mid August, and the nights are too damned hot for any reasonable person to put up with, a situation made worse when one realizes after starting this sentence that there is nothing "any reasonable person" is able to do to make the temperature of the day and the night that follows more agreeable. So it's hot, one flips the pillow over and over and over again in an effort to stay keen with the coolness the underside might provide to one's reclining face, yet this is in vain as the evening humidity is such that the body is maintaining a light patina of sweat at all times , a perspiration that covers you again quickly no matter how many times you washing your face in cold water or the number of cooling showers in the day one takes. The relief does not last, and the flipping of the pillow to get a bit of a chill is undermined by the cushion's quick absorption of the perspiration that drips in quick rivulets from brow to pillow case. It's near the same thing as trying to rest on a pile of damp dirty laundry.
But one gets up , trying to be reasonable and anxious, perhaps, to do something with this time not sleeping, so the television gets turned on, the thumb depresses the buttons on the remote control in rapid succession looking for something of interest to stare at and so get lulled into a somnambulist state but the crushing inanity of popular culture racing by the eyes --emus in dark sunglasses, smiling people on hikes and having family picnics while an announcer intones warnings of many awful theoretical ways this cure might kill you, people of all races and genders and sexual identities acting like nine year olds when the mystery brand name doesn't match their collective expectations, talk show host  and pundits in a car going over a cliff.
Not so much for the last entry,it's just the wishful thinking that might occur as a nagging undertone as one speeds through the channels and rejects what this many tentacled monster is offering one to waste time with, the whispering urge to somehow make all these actors get into a big station wagon and speed recklessly into the Hollywood Hills where the road is winding, narrow and an easy fantasy to have when the wall paper seems to bleed cheap paste and the darkened fixtures of the kitchen, the sink, the dishes, the refrigerator, are outlined like a demon's posse spare -changing in the corner for beer and chips. Nothing on television . It is 4 AM and work begins at 8 AM, the essay one is supposed supposed to write , a thousand words on writing in quarantine as a means of keeping one's wits sharp and focused. So one arrives at work early because it's too damned hot. Any reasonable person would, no?
at August 16, 2020 No comments:

Email ThisBlogThis!Share to TwitterShare to FacebookShare to Pinterest
Labels: IT'S TOO HOT 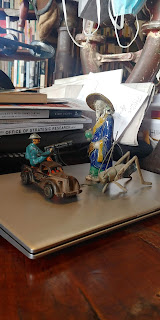 I had a resolution, just for today, to not look at the headlines and ignore the many beeping news updates that pop up on my phone, this in the belief that it would reduce whatever anger and anxiety might have been lending a foul mood to start of my day. You guessed it, I was a half hour into watching music videos when the old angst crept up even so and seemingly took the chair next to mine; not knowing what was going on during the last 24 hours and what people thought about was itself creating anxiety.

So here I am again, arguing with the Fates,shaking my fist at the skyline, royally ticked off like a caged badger you've been poking with a stick. I told someone about this and and my friend suggested it was an acute attack of FOMO, Fear of Missing Out, a notion I wouldn't argue with. The good old days which is to mean the days before the internet, or at least before the internet became ubiquitous and PCs, laptops, cellphones and tablets became appliances no more exotic than wristwatches or coffee makers)  were a time when you had to wait for the newspapers to arrive on the doorstep but once every 24 hours, the magazines would come to the news stand or your physical mailbox on very specific dates, recent movies were in theaters only, and you had to go to your bank to make deposits, withdrawls or apply for a loan.

Our current situation is one of short cuts, bookmarks, links of all sorts to all sorts of web destinations, less than half of them essential to our daily needs; they beckon to us, they have colonized our subconscious (to borrow a phrase from a Wim Wenders film) . Even when you close all the tabs and have your browser closed while your attempting to read , finally, that novel or magazine article at last and so symbolically resist the lure of the distractions that call to you, anxiety swells up slowly and boils over and before you know it the entire universe you might have been reconciled to just minutes before seems now a place of menacing organ music, slanted camera angles, deep dark corners of impenetrable blackness where curious things are going on, out of sight . The only manner to get rid of it, to quit fidgeting, to get a sense of relief and perhaps connection to the world again is to open browser, hit a book mark, see what your friends are posting, find a list of the greatest Hollywood movies about Ethiopian pizza parlors .

Go ahead, the Id tells you,the bills, the novels,the phone calls to be returned can all wait. And then we start all over again, your method of relief soon becomes habit that provides neither relief nor joy, and after some months of feeling hallowed out and used up by the sheer force of the super highway, we try to starve ourselves, cold turkey, of our robotic mouse clicking. But that doesn't work . Ack!
at August 15, 2020 No comments:

I came across Beyond White Space somewhere on the net, a space opera set far off in the future when the earth is running out of resources and much of human commerce now takes place in the darkest depths of outer space. A crude summary, but it sounded promising and worth a watch. It was not. It's a shame that this film is so sluggish and dim-witted in spirit because it has a convincing, future-grunge look to it and contains, really, an interesting premise that would have made for a smart sci-fi movie. Without giving away anything essential, which is not a hint that readers should visit this sluggish and shuffling enterprise, we have what might have been a space version of "Moby Dick", centering on an obsessed captain endangering his crew in pursuit of a giant creature capable of living in the vacuum of outer space. This creature, incidentally, guards against planetary fortune seekers, stragglers and pirates from entering a fabled part of the outer reaches called White Space, rumored to be an actual Heaven the space creature keeps out of our reach. Again, an interesting premise that gets stepped over by one-dimensional characters, stiff acting, and lead-footed pacing. The film looks great in parts, but there is a claustrophobic feel to the thing that never lets up; you have the feeling of someone shoving their camera phone in peoples faces for ninety minutes or so. That can be effective in the right hands, as I'm thinking of the 1st "Cloverfield" movie, but this is that rare thing, slick incompetence.
at August 04, 2020 No comments: